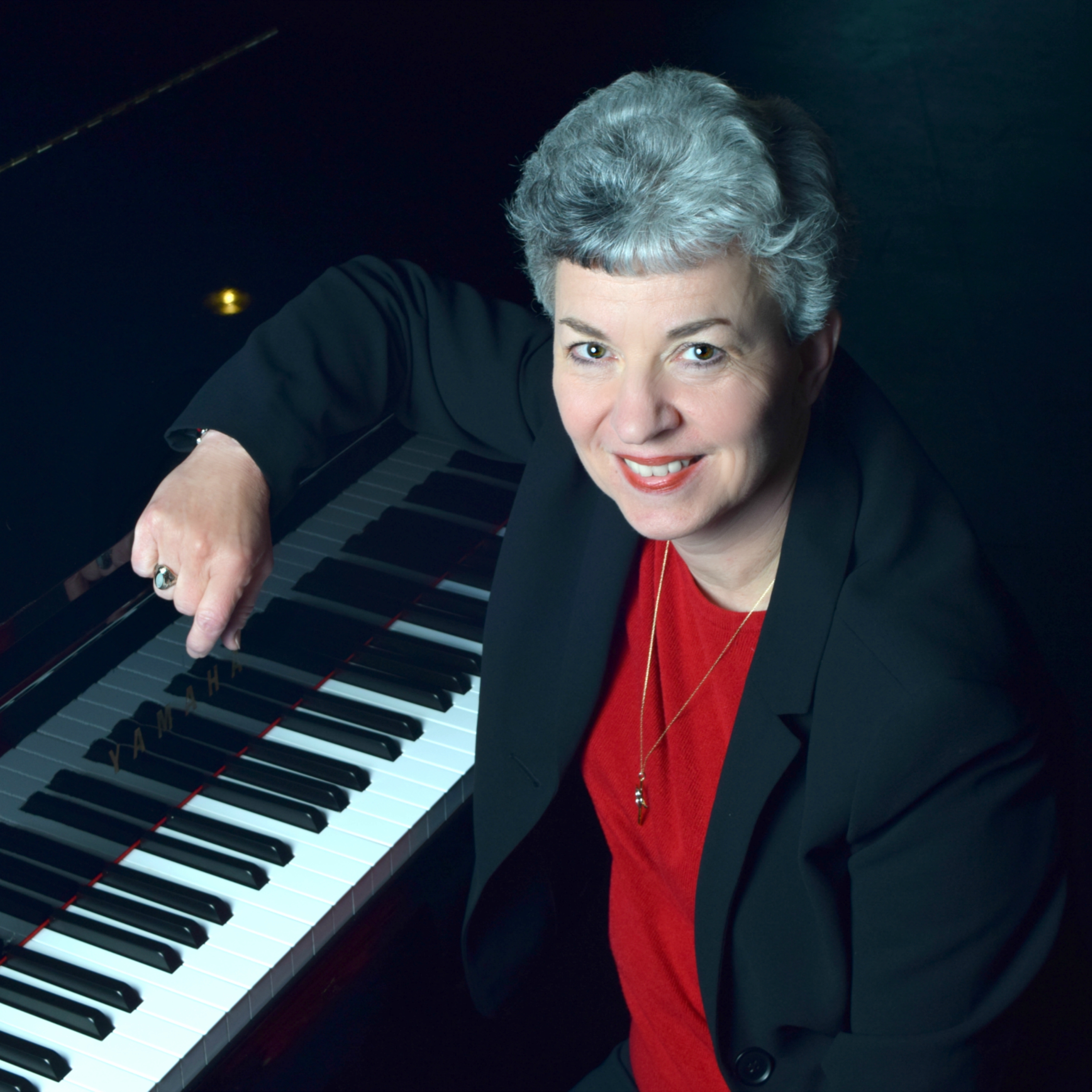 Cathy Sigman Banner joined The Green Room staff in 2008 as a part-time Administrative Assistant which quickly grew to a full-time position as programs were added and the move was made to the Old Post Office Playhouse.  She has also served as Musical Director for at least two shows each season since then, but her association with The Green Room actually began in 1988 when she played for the theatre’s first production of Grease.  She had the honor of being onstage in several shows before joining the staff (Anne of Green Gables (2003), Camelot (2003), The Sound of Music (2004), The Adventures of Tom Sawyer (2005), Fiddler on the Roof (2005), and The Secret Garden (2007)). She also served as instructor for a Musical Theatre class as part of the Creative Works afterschool classes. Cathy is quick to admit that her daughter’s involvement with The Green Room pulled her in as well!

Cathy is a native of Catawba County who attended Bunker Hill High School and earned her Bachelors of Music in Voice from the University of North Carolina at Greensboro.  She served many years in church music as choir director, organist, working with children and handbell groups, and directing or playing for many Christmas programs and church plays.  She has taught voice and piano lessons since she was in high school, but her most beloved career has been that of wife to Randy and “Mom” to Matthew, Christina, and Jonathan.  She is thankful for the Lord’s many blessings in her life and seeks to honor Him in all that she does. 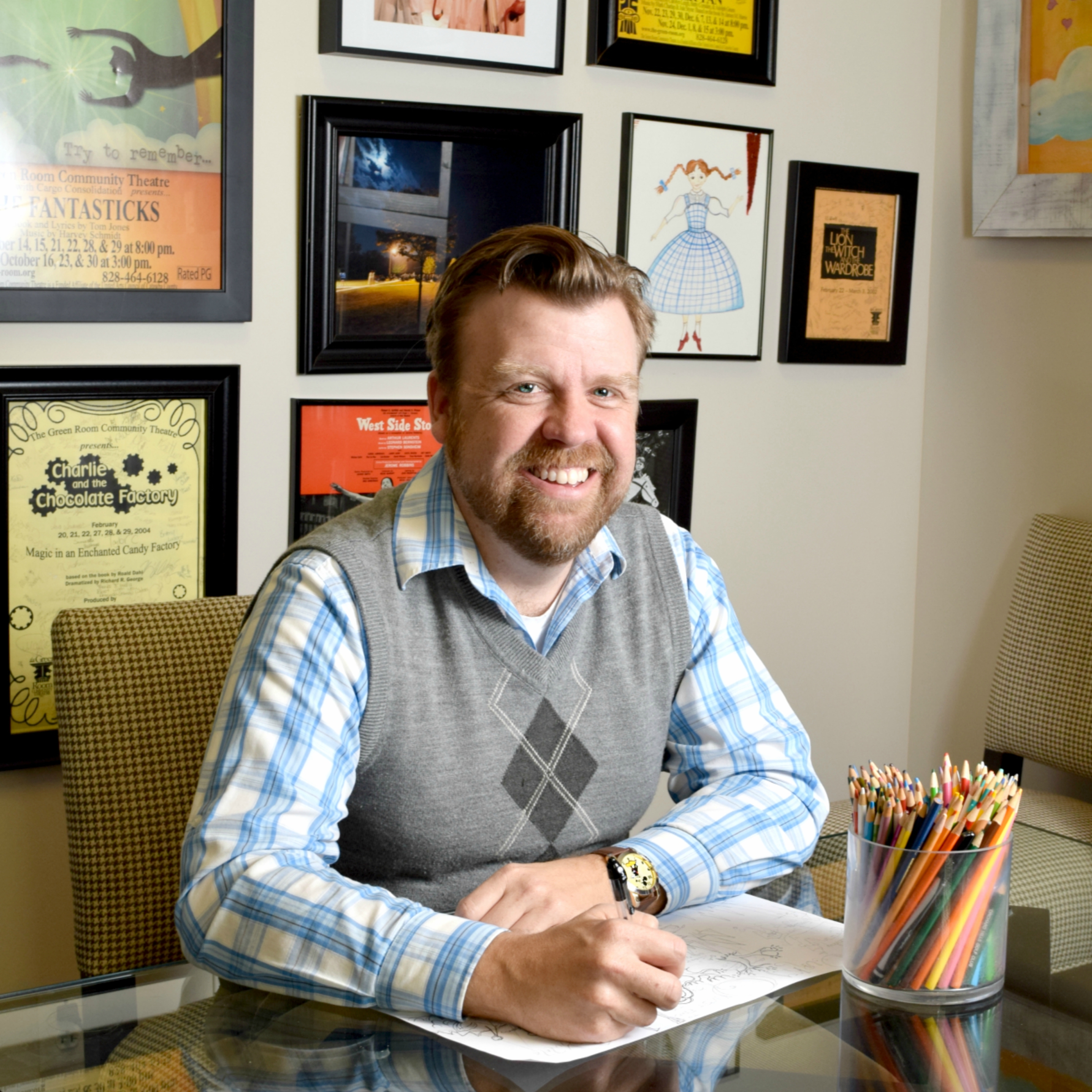 John David Brown III is the Creative Director at The Green Room Community Theatre. With a background in Theatre Education, David started The Green Room’s Creative Works after-school drama program. He also cofounded The Green Room Summer Shakespeare Theatre Institute and is a founding member of The Green Bean Players. David has directed and co-directed many shows at The Green Room including Bye, Bye, Birdie, The Lion, The Witch, and the Wardrobe, The Wizard of Oz, Peter Pan, Annie, and Beauty and the Beast. He is also a playwright (The Clockmaker’s Child, Isabella at the Circus, The Quirky Quest to Find the Unicorn’s Ukulele) and costume designer (MTA Award winner for Into The Woods 2012) David also designs the show posters at The Green Room and the quarterly newsletter.

Originally from Mount Olive, North Carolina, David has a degree in Theatre Education from Appalachian State University with an English endorsement and a concentration in elementary arts. He also has an associate’s degree in Graphic Design from Catawba Valley Community College. He has participated in the Shakespeare Lives program with North Carolina School of the Arts and the Keenan Institute through which he spent time studying at Shakespeare’s Globe in London.

When he is not working at the theatre, David can be found in his art studio. He is a painter and illustrator. He paints whimsical storybook style pieces of art. He has also illustrated a children’s book No, No, Miss Kitty Kat by Michele McCreary and created a companion board game to his play The Quirky Quest to Find the Unicorn’s Ukulele. 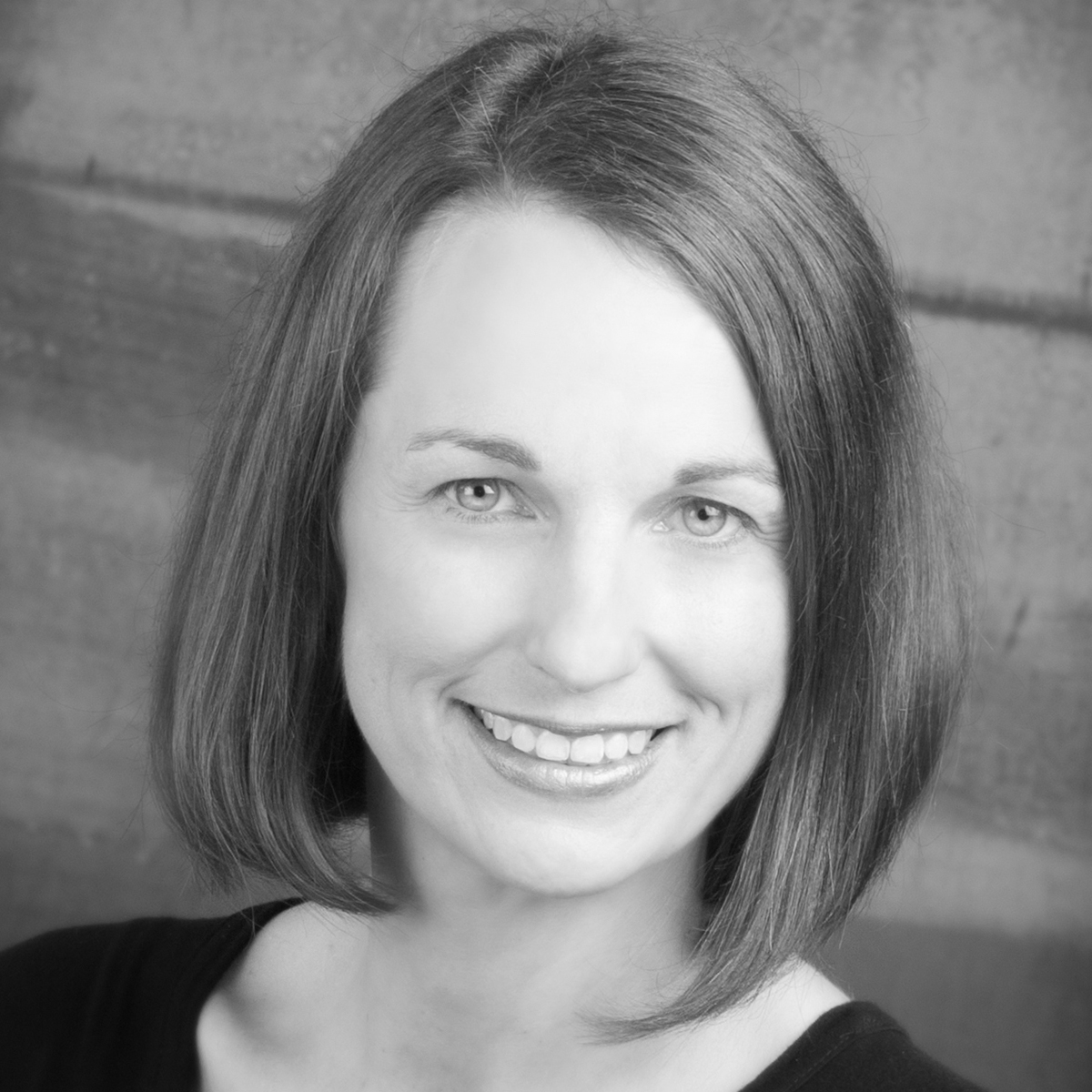 Haley Edwards Beech is the Marketing Director at The Green Room Community Theatre.  The Old Post Office Playhouse feels like “home” to her because she grew up spending lots of time at her grandparents’ Furniture Store, located on the square.  She remembers walking the block to the old P.O. to check Box 405 and collect the mail.  Sweet memories still flood her mind as she enters the building daily.

Haley is a native of Catawba County who graduated from Bandys High School in 1995.  She graduated from Meredith College in 1999 with a Bachelor’s Degree in Communications and a minor in music (Voice).  She led worship & played guitar for the college ministry, Cru, all 4 of her years at Meredith/NCSU.     Haley has a big heart for Education and has volunteered at Tuttle Elementary serving several years as PTO President.  She also was contracted as a Tutor there for the last 3 years.  Most recently, Haley was elected to the Board of Directors for the Catawba County School Education Foundation.

Haley has been married to Jason since 1999.  They met in Branson, MO on a Summer Mission Project with Campus Crusade for Christ.  After graduating from college, they went on staff with “Cru” and lived in Wilmington, NC for several years.  Her biggest job is being “Mama” to 2 energetic boys, Landon and Gabriel.  It was Gabriel who introduced her to the theatre when he got involved at The Green Room in the second grade.   He urged her to audition, and she made her debut performance in “The Dixie Swim Club.” 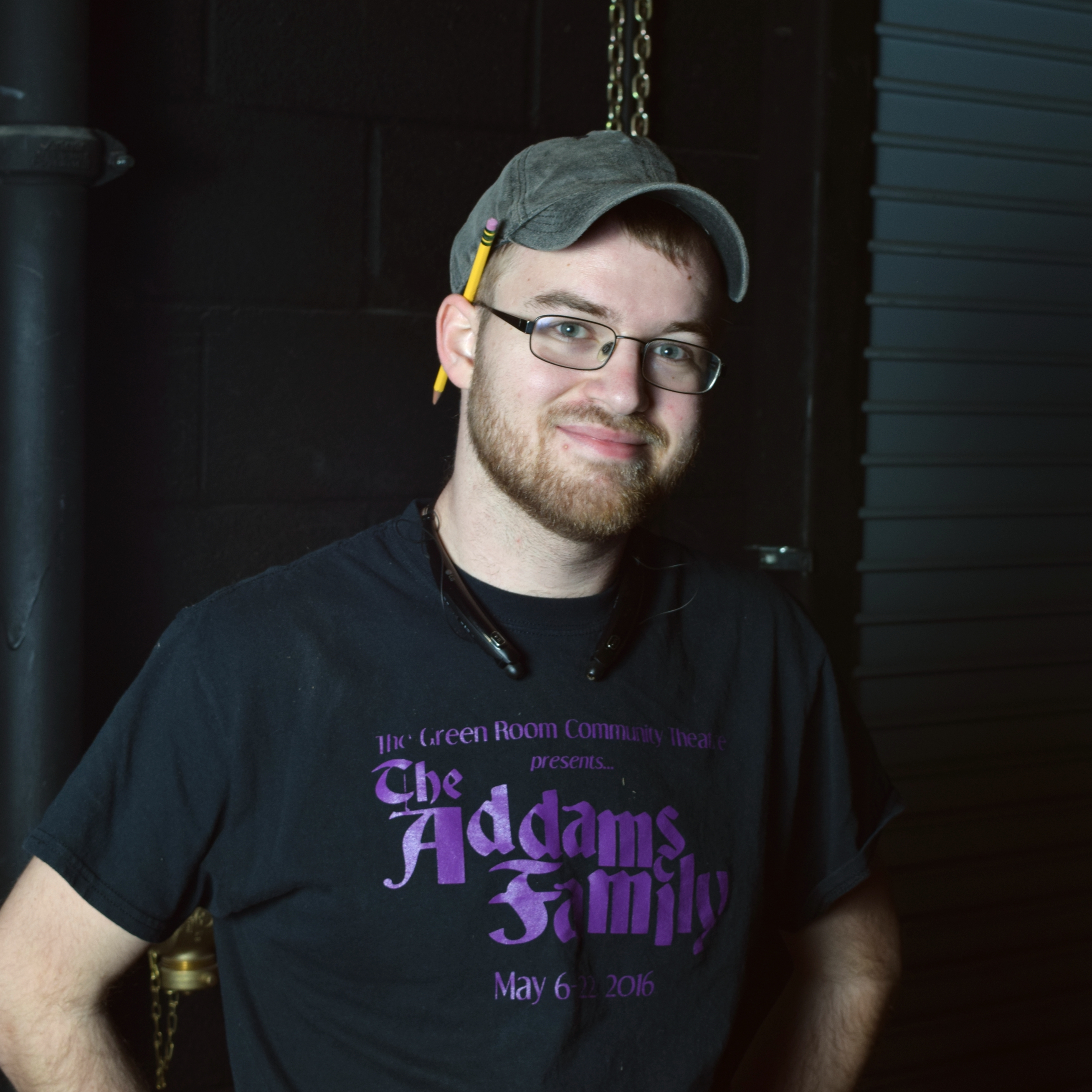 Jonathan Randal Banner is the Technical Director for The Green Room Community Theatre. He has been with the Theatre full time since the spring of 2014, but he has a long history with The Green Room. He’s done everything from being an Actor, to being a Stage Manager, volunteering for set construction, and even managing the prop storage. To say he grew up in the Green Room would be an understatement. Though he has many roles as Technical Director, you are most likely to catch him behind the sound board during a musical.

Jonathan was born and raised here in Catawba County, while he did spend some time in private Preschools, he’s entire Grade, Middle, and High School education was done in Homeschool. He credits his Homeschooling with being able to participate in so many Green Room Shows during his teenage years. He graduated from Gardner-Webb University in the fall of 2013, with a Bachelors of Arts in Tech Theatre. In addition to working at the theatre he spends his time hiking, drawing, and various other artistic endeavors. He is always tinkering with something and always has a few projects in the works.

Samantha Styer will be the one to greet you with a smile when you drop by The Green Room Community Theatre’s office. She is the Education Director for the Green Room Community Theatre. She has a heart for education and was a middle school language arts teacher and high school cheerleading coach  prior to joining the TGR team. She holds a Bachelor’s Degree in Elementary Education from The University of South Carolina and a Master’s Degree in Curriculum Specialist from Appalachian State University. She is currently finishing another graduate program in School Leadership. The Green Room feels like home for Samantha as she began performing here during middle school; she credits her dad for sparking her love for the stage after bringing her to her first audition for Fiddler on the Roof in 2005. After taking a decade-long break, she came back and has been regularly performing here since the fall of 2016. Some of her most recent credits include Shelby in Steel Magnolias, Margo in Bright Star, and Cha Cha in Grease. She also had the privilege of serving on The Green Room’s Board of Directors for one term.

Samantha met her husband Michael here at The Green Room during the run of Bright Star, and they married in July 2020. They enjoy traveling, hiking, and cooking together when they have the chance. While she thoroughly enjoys her time at the theatre and performing on stage, her favorite roles are wife, bonus-mom to Izzie, and dog mom to her two rambunctious pups, Coralee and Cody. She is thankful to be surrounded by her theatre family all day and to go home to her biggest supporters every evening.

Are you ready to get involved?